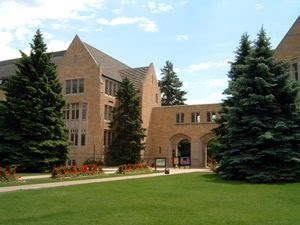 Well it's official, Ethan got into law school! The school is St. Thomas and it is in Minneapolis. The first letter Ethan got was a rejection and he was so worried he wasn't going to get into to any of the schools he applied to. He is usually really calm and doesn't get stressed out easily but I noticed a change in his disposition after that first letter. He was definately worried so when we got accepted he was so happy. It was on a Monday and we had both just finished work. He opened the letter as I was looking for seasoning for the steak he was going to cook for dinner. He read the first line aloud and we started celebrating right after hearing the words "congratulations, you have been accepted..." We probably celebrated for a good 10-15 minutes before going back and actually reading the whole letter. Then came the shocking part...St. Thomas offered him a full tuition 3 year scholarship!!! We were literally in shock! We proabably re-read it 10 times just to make sure those words were still on the page. The boy who was worried he wouldn't get into a single law school just got a full tuition scholarship! I was so proud! We called his parents and then my parents who were all so excited for us (although I think Mona was secretly sad because she really doesn't want us to leave Utah). Last we called my brother who is also going to law school in Minneapolis at a different school. He was the one that convinced Ethan to apply to St. Thomas. Finally after all the calls Ethan said there was no way he was cooking tonight so we went out to celebrate the amazing news. What a great day!
Posted by Mayce and Ethan at 8:35 PM

We are so thrilled for you both!!! Congratulations! Two lawyers in the Huntington family...Wow!
We Love You!!!

Yay! We're so excited to have you guys here - even though we'll only overlap for a year :(. The scholarship is awesome - you'll have a fun three years.