Warning: This post will be a short novel so proceed with caution.
Ethan and I are very excited to announce that we are expecting a baby around December 8th. Now to be totally honest, this baby is a bit of a surprise. We were planning on waiting until the fall to try and get pregnant so I would know if I still had a job and insurance (we are having a budget crisis in our school district). Obviously this baby was ready to come now :). I'm guessing it's a whole lot more fun to tell your husband you're pregnant when it's a surprise as opposed to when you are actually trying. So this is how it went down. I decided to take a pregnancy test on April 1st (that's right...April Fools Day!) I honestly don't know why I even took the test, I had no symptoms and it's totally normal for my period to be a day late. I guess I just thought it would be fun to take one since I never have taken one before. When I went to check on the test I saw just one line (negative) which is completely what I expected to see. I picked it up to throw it away and noticed a VERY faint second line. Hmmm. Well because of how faint it was I figured it still meant negative but to ease my mind I started googling what a very faint line on a pregnancy test meant. To my surprise everyone said that if there is a line, no matter how faint, you are pregnant! I still wasn't completely convinced so I called my sister at work and said "I think I might be pregnant!" Of course she was so excited and asked me what Ethan said. Oops! I haven't told him yet. For one, I didn't really want to tell him on April Fools day because I KNEW he would never believe me. I also wanted to take a digital read test so there would be no confusion on the results. The whole night I kept this huge secret from Ethan. Sorry babe! My sister's husband Davis knew Ethan was going to be a Dad before Ethan knew! Ha ha! So obviously the digital test said pregnant. I immediately ran out to do what I do best (shop!) for a baby boy and baby girl outfit. Idea stolen from my friend Jami. Here are the outfits I picked: 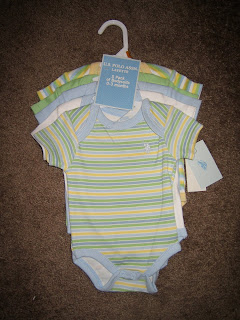 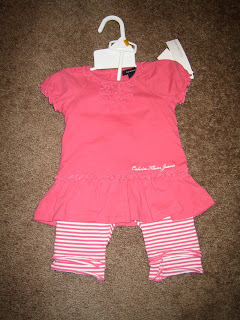 I told Ethan that I had bought him T-shirts at the mall and the girl at the store was bored and wanted to gift wrap his shirts. He totally bought it! When Ethan got home I led him to his present and told him to open it. He pulled out the baby boy outfit. As I anxiously waited for a response, this is what I hear "Aww baby clothes." Hmm not the response I expected. I just stared at him for a minute waiting to see if he would get it. He didn't. Apparently he thought I had bought my niece or friend's baby an outfit. Finally I got impatient and pulled out the two positive pregnancy tests. That got his attention! Now only if there were a word to describe his face. Oh wait there is...SHOCK! After a minute he started laughing and said "Wait this is a late April Fools joke right?" See I told you I couldn't tell him ON April Fools Day. I assured him it was not and that we were really going to be parents. 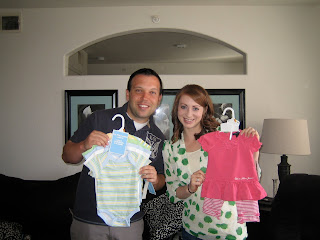 He was still very skeptical but realized it was in His best interest to take me out to dinner to celebrate. Right after dinner he went to Wal-Mart to buy another preggo test. I guess he wanted to make sure I wasn't getting the positive tests from a friend or something. Still pregnant babe! After the shock wore off he got really excited and says it would be cool to have twins (please no)! He really wants a boy but my mom is thinking it's a girl. I have no clue. I just want my baby to be healthy. 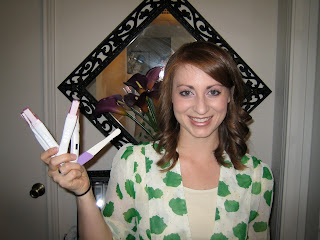 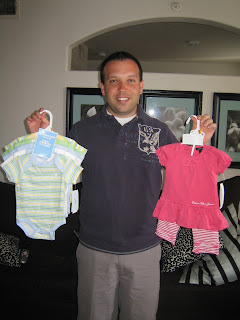 I haven't been sick at all thank goodness, just tired. I'm 11 1/2 weeks and today we got to hear it's little heartbeat. It was so fast and it made me so happy to hear. Thursday we have our first ultrasound and hopefully we will find out the sex in July. The dogs aren't quite sure what to think yet. We are sure they will have an opinion once the baby gets here. Zoey is actually really good with babies. She likes to sniff their baby heads! Dex we will have to watch closely! 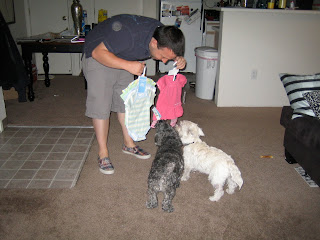 We will keep you posted on the rest as it comes!
Posted by Mayce and Ethan at 12:23 PM

Congrats!!!! What a wonderful thing! I can't wait to see your belly grow and see what you are having. I can't believe you have been keeping it a secret for so long!! I couldn't keep it in. PS I totally called my sister before I called Gian. ahahah OOPS is right!! Can you blame us? When it's a surprise, you need to talk to someone first to make sure you aren't loosing it.

PS you should get the intilgender (however it is spelt). It is so much fun to take it. Just make sure you follow the directions EXACTLY!!

I love this!!! And I'm so glad that I could have inspired you to do a little shopping! Your story is seriously identical to how finding out I was pregnant all went down...my sister knew I was pregnant before James too! ha. Love ya girl and iI am SO excited!!!

Yea!! We are so excited for you guys... Congratulations!

I am so excited for you!! You are going to have the cutest baby!

Hey it's Whitney Klc, Peter's wife. I saw on Ethan's facebook that you guys have a blog. Congratulations on the little peanut, that is exciting news! I love all the pregnancy tests! We have a blog too, it's private. If you want, send me your email address and I will add you as a reader. wgarrick@comcast.net
Take Care!

I didn't know you had a blog. It's so cute! Congrats again. I think I'll tell you every time I see you so you know how excited I am.

I'm so excited! I love the picture of you with all the tests - who knew one little line could mean so much! Piper's going to have a cousin! YAY! See you soon!

Oh so excited! I'm glad I finally got to read the story. I think I can pretty much picture Ethan's face. Did his eyes get REALLY big? I can totally hear his laugh too. I can't wait for you two to be parents. Also, I sort of have a gift for predicting the sex of my close friend's babies. I've been right every single time.

CONGRATS!!! I'm so excited for you!